PjPaintings at Salamanca Market May 6, 2017

We had another warm and blue-sky day today, until packing-up time and then the rains came.  The top of the gazebo got quite wet.  Usually I just leave it, and the market tables, in the car but now I’m going to have to get it out and let it dry out, and the gazebo weighs A LOT.

The Adelaide Crows played the Kangaroos at Blundstone Oval, Hobart today.  I saw Crow supporters at the market but no Kangaroo jerseys.  There was also a national nursing convention in Hobart, 600 nurses in attendance, I was told.

A couple from Geelong, expecting their first child, which is going to be children, twins due in October, bought an A-3 sized print of Duck Crossing for their baby’s room.  They don’t know which sex the twins are but they do know that they are both the same sex, either two girls or two boys.  They also got an ink Yellow Sulphur Crested Cockatoo painting for their parent’s nursery that they are preparing for their new, soon-to-arrive, grandchildren.

A lady from Sydney stopped for a chat and bought a print, but I can’t remember which one.  She has started taking a once a month art class with her adult son and is loving it.  She said that she used to draw a little in the past and that she is really happy to have re-connected and re-ignited this creative side, and that she is able to do it with her son.

A mother and adult daughter stopped at the stall and the mother pointed out the three pjpainting prints that she has framed and hanging in her house.  She decided to add to her collection and buy three more!  She bought Beachside Chatter, Family Outing and Quilting Bee.  She’s mad about quilting and told me about Rag Quilting.  I’ve made a few quilts about 15 or more years ago and also loved quilting, but lack of time has forced me to abandon this relaxing pastime.  I hope I can take it up when I retire from my day job, painting and quilting, now wouldn’t that be awesome! 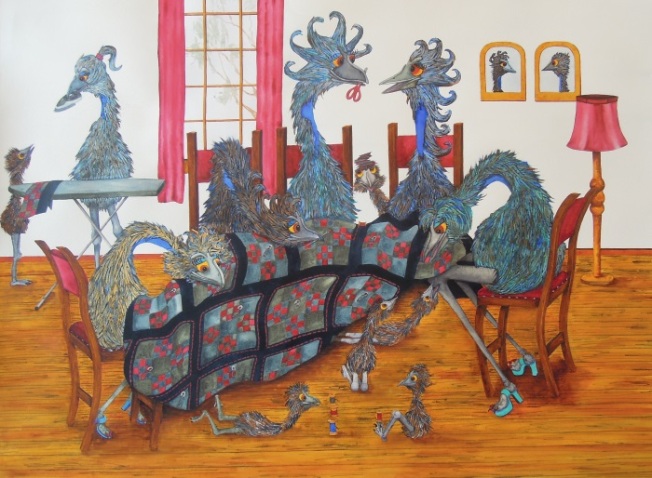 Two ladies on a coach bus from Newcastle (the bus drove to Melbourne, sailed on the Spirit of Tasmania to Tassie and now they are touring Tassie) and having a great time here.  They each bought a print and one also bought a koala ink drawing.  Both ink paintings were painted last night.  I didn’t have a chance to photograph them.

Two young men stopped at the stall.  I asked where they were from and one answered from Adelaide.  I told him that I loved WOMAD.  WOMAD is an international music festival hosted in the Adelaide Botanical Gardens. He said that he’s been to WOMAD every single year of his life.  He’s attended 22 WOMADs.  His mother took him to his first WOMAD before he turned one. We both agreed that WOMAD is awesome.  I’m planning on attending again. I thought that maybe they were brothers, but it turned out that Killian was from Belgium, here for one year.  He’s Flemish.  He has three months left before he reluctantly goes back to Belgium and vows to return because he prefers Australia.  Part of my new tradition is to take photos of fellow Belgians that visit the pjpaintings stall.  There aren’t too many travelling Belgians, Killian agreed, so this will not be a difficult tradition to maintain.

Today’s best sellers were:  “Who, Who, Who are You? II”, “Richmond Bridge, Tasmania”, “Duck Crossing” and “Scarlet Robins”.

A thought to ponder:  “Art washes away from the soul the dust of everyday life.” Pablo Picasso

Warmest regards, from the Pjpaintings stall #30 at Salamanca Market, Tasmania