A cruise ship sailed into the Derwent River at about 6:30 am and docked close to Salamanca Market. It started its travels in New Zealand, then it is going to Melbourne, Sydney and eventually to Vanuatu. I met several Americans from the ship. A couple from North Carolina, who had visited Richmond in the morning, bought a “Richmond Bridge, Tasmania” and a “Salamanca Saturdays” print for their Tasmanian souvenir. The gentleman was a large and lively personality. A lady off the ship, from Hawaii, was enamoured with “What the Devil!?”

A family from Texas that have been living in Canberra on a work exchange, stopped and browsed in the pjpaintings stall. They were heading back to the USA after their Tasmanian visit. They loved their year-long Australian experience. The 14 year old girl particularly liked playing the different team sports while at school here.

A man, enchanted by the dancing emus, ran off to put more money in his parking meter and then returned. He debated long and hard over his choice and eventually decided on “Spanish Eyes (Red) II” and “Spanish Eyes (Yellow)”. He told me it was for his gypsy lover in Ipswich, Queensland. 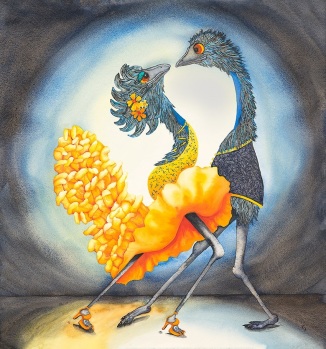 A Sydneysider purchased an A-3 sized “Duck Crossing” for her 16 week old great nephew. “Barn Owls” is travelling with its new owners back to Scotland. A family with three young boys, living in Dubai, spending Christmas in Tassie, each chose an A-4 sized print. The youngest wanted the red car one “Family Outing” and the other two boys chose an owl print.

I had a lovely long conversation with three young adults from France. The young man said that I had a good French accent. Yay!

🙂 The little bit of effort to try to speak some French each week is starting to pay off as I was searching less for words.

A couple, currently living in Melbourne, but the young woman is from Russia, bought a “Double Date” and “What the Devil!?” greeting card. A teacher from the Gold Coast, Queensland, purchased a “Yellow Poppy Fields” print and then later in the day returned and also got “Story time”. She was debating whether or not to get on her first visit to the stall.

“Rising Above It” is going to a nurse working at the Royal Hobart Hospital, who has been working a long time with women and the range of health problems encountered in that department, hopefully conquering and rising above illnesses and health conditions.

A Tasmanian Devil little original is going to Sydney and another Sydneysider is taking “Salamanca Saturdays” and “Who, Who, Who are You? with them. A “Double Date IV” print is going to Perth with somebody who has been enjoying a two week Tasmanian holiday.

A thought to ponder: Art is not in the …eye of the beholder. It’s in the soul of the artist.”
― Seth Godin

Wishing you a safe, happy and creative week from the Pjpaintings stall at Salamanca Market