The final cruise ship visiting Hobart on a Saturday for the 2018 season arrived in the morning. Many cruise ship passengers bought greeting cards. They are unique and easy to fit into suitcases. A local Hobartian bought pjpaintings greeting cards for the same reason to take with her on her trip to Ireland next month.

Early in the morning, a mother and daughter from Belarus visited the stall. I think that is a first, but maybe not. I also had a former student from the Return to Study course that I teach, who is now doing an Enrolled Nursing course, stop by. Hearing that she is doing well with her studies provides me with great job satisfaction, a sense of pride and so much happiness for her that she is on her way to fulfilling her dream.

I had a couple from San Francisco, USA buy a “Duck Crossing” and “Family Outing” print. Then I had grandparents from Melbourne buy the exact same two prints for a child’s nursery at their house. 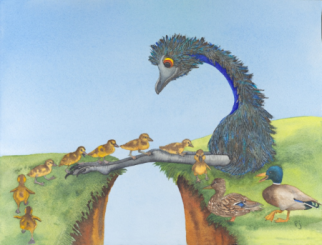 I had a couple on a bus tour of Tasmania, with Salamanca Market being their last stop, buy an A-3 sized “Hayride” print. (The limited edition print run of 100/100 of the A-4 size has SOLD out.) They live on a bush property in Queensland. Another couple, from New Zealand, also bought “Hayride”. They said they had a ‘hobby farm’. I’m not sure if 200 acres is a hobby farm?? That sounds rather large to me.

The last A-4 sized print of “Salamanca Fresh” sold today. This print is now only available in the bigger sizes. It went to the Gold Coast, Queensland.

A gentleman bought “Under My Red Umbrella” and as he was leaving the stall, said that he thinks he, ‘could get a kiss for that’. Ahh, the hidden agendas…

A lady here from the USA, doing a watercolour plein air course taught by David Taylor, said that she is playing hooky today and shopping at Salamanca Market instead. She purchased three prints for her children, one going to Minneapolis, the other two to North Dakota and Arizona.

One young lady from Brisbane bought “Suspended”. She swam with humpback whales in Tonga. A Norwegian lady bought several prints to give to her children living in Oslo, Bergen and Trondheim, Norway.

A group of motorcyclists, touring Tasmania, bought “Joy ride!” for one of their mates, who rides a Ducati, 50th’s birthday. Yesterday, they rode to Cockle Creek, Tasmania. A lady from Perth, WA, who said that she likes unique art, bought “Story time” and “Hayride”.
A couple from Taree, NSW, who do creative and unique framing, bought some cards to frame. He showed me how he had framed four cards that they bought when they visited the outback. He mounted an opal in the middle. It was stunning quality framing. It looked really good. They said that they would try to find some special Tasmanian object to mount in the middle of this collection of cards.

This week’s most popular print is: Duck Crossing

A thought to ponder: “I dream my painting and I paint my dream.” ― Vincent van Gogh. A lot of my ideas come during the night. I don’t think too many from dreams, but when I can’t sleep, I think of many ideas and some concepts evolve when I’m in the in-between state of awake and asleep.

P.S. My website is still down because it has been hacked. It should be back up in a next week.

Take care and I hope that you take a line for a walk,
from the Pjpaintings stall #30 at Salamanca Market.