The last few days have been surreal.  Thursday and Friday, Hobart broke a 100 year record.  We copped 200mm of rain in a 24 hour period causing flash flooding and havoc in the city and suburbs.  I faired quite well with just a flooded garage and water coming in six different windows.  I was able to keep it at bay by rotating all the towels I owned, through a spin cycle and trying to dry them as much as possible in front of the heater (I don’t own a clothes dryer). Lightning lit up the sky virtually for four hours.  By 10 pm, I was exhausted and piled up the window sills with towels and went to bed.  I got up at 2 am and lightning was still lighting up the sky.

Friday evening, I braved the winds to see Eskimo Joe and the Tasmanian Symphony Orchestra (TSO) at the Hobart Federation Concert Hall. It was an awesome concert.  The conductor was such a joy to watch.  He was totally into the music and expended so much energy. No wonder he is thin and fit!  During the rehearsal, he broke his baton with his incredibly enthusiastic conducting.  He had it taped up for the night’s performance.  We sat five rows in front of the drummer, who was equally impressive. 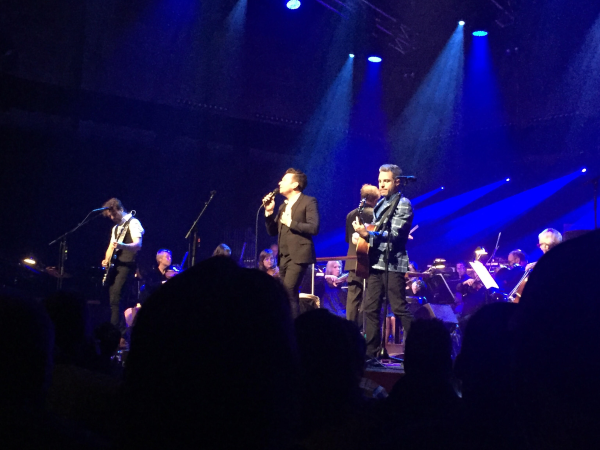 The main road in front of the concert hall and the footpath on the other side street was still covered by water.  There was debris and mud everywhere.

The next day, all was calm for Salamanca Market. I had a very articulate two-and-a-half year old, Patrick visit the stall.  The ‘Family Outing’ print caught his eye.  “That’s my car!”  His mother said that they didn’t have a Mini.  I said maybe it’s the colour, but no they didn’t have a red car either.  He had a lot to say about this car and the emus driving it.  He also told me that his brother fell on a hill yesterday and that it got lots of blood all over him and his brother.  Apparently there was no blood but his brother did fall.  He went to ZooDoo and talked about the animals there, about his and his brother’s hats, that they lived on a plane (they took a direct flight from Adelaide to Hobart) and much more, with the conversation returning back to the Mini several times.  His mother ended up buying the ‘Family Outing’ print for him because he was so captivated by it.

I met a young lady from Germany, doing her PHD on Humpback whales in the southern hemisphere exclusively, investigating how the melting and diminishing ice is impacting on their food sources.  She started her undergraduate in Townsville, is doing her PHD in Brisbane and examining her samples at the CSIRO here in Hobart.  She purchased a small ‘Sea Life’ print.

A ‘White Faced Scops Owls’ print was purchased for a sister who is mad about owls.  She lives in Scotland and it will be delivered in person by her brother.

A lady exclaimed, “that’s the print a friend gave me!” as she singled out ‘Glamour Girls I’.  It’s hanging in a prominent spot in her hair salon in Brisbane and draws many positive reactions and smiles she told me.

A group of young people, visiting from Taiwan, bought ‘Who, Who, Who are You? II’.  They had visited Bonorong Wildlife Sanctuary and were visiting Richmond on Thursday when 200mm of rain was bucketing down.

I met a lovely couple that drove from Brisbane to Melbourne, took the ferry across the Bass Strait to Devonport and are now touring Tasmania.  They were particularly impressed with “The Wall”, which is a massive wall carved by Greg Duncan.  It is indeed impressive.  He’s even included the leg of the Tasmanian Emu, now instinct, in his carvings.

A lady stopped by the stall and in her hand, she had a Cary Lewincamp CD, the one that I illustrated the cover.  She asked me to sign it and started telling me how much she loves Tasmania.  She moved here 10 years ago from Canberra. Her husband is #15 of 17 children and she has 48 nephews and nieces!

A mother, daughter and Auntie, visiting from Argentina, spent a long time at the stall and later on in the day, returned to buy ‘Rising Above It’.

Pack-up was hurriedly done because I drove straight from the market to a Celebration of Life for a special friend’s husband.  The couple were keen dancers, so she organised dancing after the ceremony.  We danced and cried until 10 pm. I arrived back home late and with a sore knee.

Wishing a Happy Mother’s Day to all, and for those who are carrying losses and Mother’s Day accentuates those losses, I hope the day is gentle on you.