I’ve often told myself, that’s it, give up on these marsupials and monotremes but there is something about the challenge and their cuteness that draws me back again and again to try this troublesome pair.  I once read, but unfortunately didn’t take note of who was imparting this wise piece of advice, ‘don’t strive for mastery. Strive for prolific and the mastery will come’.  In other words, practice. 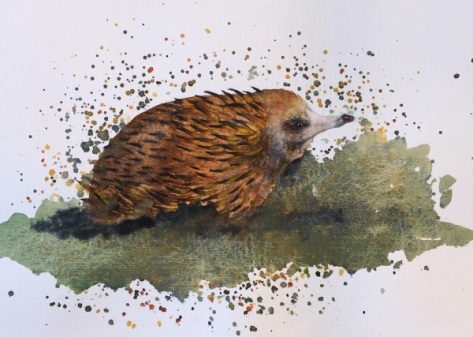 For now, I think I will go back to painting birds, but I’m sure something will draw me back to trying to paint this problematic pair again.

Thanks for reading and I hope the upcoming week is a good one for you. 🙂 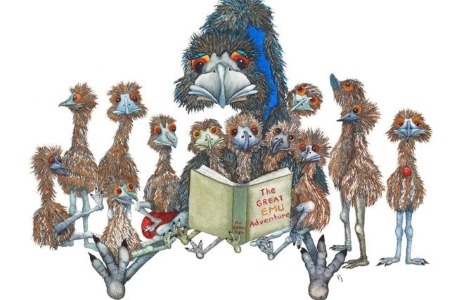 It’s so nice to have the days getting lighter and longer. A couple of ladies visited the stall at approximately 8:30 am. They said that a stall holder told them that the market opens at 9 am but that the tour bus they took yesterday had told them that Salamanca Market started at 8 am. The latter is correct and I was glad to start the day with their early visit. They bought a tote bag each and a small zipper pouch for a friend who loves owls.

I had a nice conversation with a Hobartian, in his early 20s. He draws and is also trying to draw using an ipad program. He bought a card of ‘Suspended’, his favourite of my paintings, and a sticker. He came back in the afternoon because he had lost his sticker, so he bought another ‘Salamanca Saturdays’ sticker.

A young lady, from Barcelona, studying in Sydney, purchased some emu themed Christmas cards to post to Spain. Grandparents from Mornington, Victoria, bought a ‘Family Outing’ and ‘White Faced Scops Owls’ prints to hang up in the room that their grandchildren sleep in when they visit.

A couple that live on a rural property in Lismore purchased a framed ‘Hayride’ and another couple, farmers in Queensland, who are not experiencing drought conditions, also purchased ‘Hayride’.

A lady is taking a ‘Story time’ and ‘G’Day’ print home to Colorado, USA and a young couple is taking ‘Suspended’ back to Queensland with them. A piano teacher bought little ‘Duck Crossing’ pouches to give as thank you gifts for people that helped with the production of their school’s play, a modified Ugly Duckling story.

I sold one little original this weekend. An echidna I painted two nights ago.

‘The Three Amigos’ was the most popular print this weekend.

A thought to ponder: “It is good to love many things, for therein lies the true strength, and whosoever loves much performs much, and can accomplish much, and what is done in love is well done.” Vincent Van Gogh

Thanks for stopping by. Wishing you a creative and happy week,
from the Pjpaintings stall #30 at Salamanca Market.

August 18, 2018August 18, 2018 ~ theunfurlingartist ~ Leave a comment
Rain was forecasted so we were very lucky to not see one drop of it. There were white fluffy clouds and blue skies instead.
Hobart is hosting the Festival of Bright Ideas, promoting science, this weekend. A mother, whose daughter is living in the UK, a scientist and the founder of The Curiosity Box, (www.curiosity-box.com) bought a ‘White Faced Scops Owls’ for her UK granddaughter.
Many small originals were purchased today with whales going to China and Hong Kong. 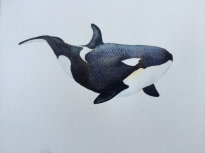 Baby Sienna was given an original platypus painting last year. She’s about to have her second birthday, so her grandmother was sent back to the pjpaintings stall to buy another original. A galah was chosen for Sienna this year.
A Yellow-tailed black cockatoo was selected by a young lady who told me that her UK grandfather is a watercolourist. He has bought her paints and she is currently trying to learn watercolour painting. She showed me a photo of a lovely blue and green humming bird that she painted.
Prints from the unfurling series were popular today. One is heading back to Phoenix, USA, another to the mainland, two are staying in Tasmania, one is going to China and I can’t remember where the others are going. 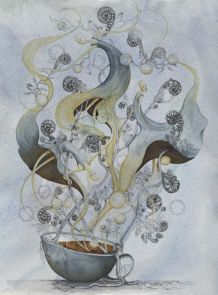 A ‘Scarlet Robin Rescue’ print was chosen as a gift for a friend expecting her first grandchild. ‘Helping Hands’ and ‘Who, Who, Who are You?’ are travelling to Texas, USA. She told me that her daughter wanted her to get something whimsical. I think she has fulfilled that criterion.
A sister-in-law bought a ‘Family Outing’ print for her brother-in-law. The print represents his family. A lady, from Brisbane, whose friend has my artwork hanging up in her home, sought my stall out and bought ‘Duck Crossing’ and ‘Yellow Poppy Fields’.
Rising Above it, Entanglement and Lost Worlds from the Unfurling series were the most popular prints this weekend.
A thought to ponder: “To live a creative life, we must lose our fear of being wrong” –Joseph Chilton Pearce
Thanks for visiting and wishing everybody a happy upcoming week from stall #30 at Salamanca Market. 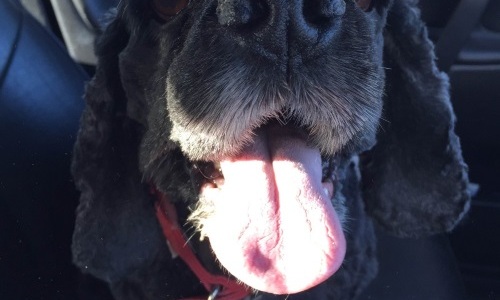 Meet Charli, my small American Cocker Spaniel that is now almost 12 years old.  I’ve had her since she was a puppy.  Don’t let this cute little face fool you.  She is mischievous and requires an eagle eye on her at all times. 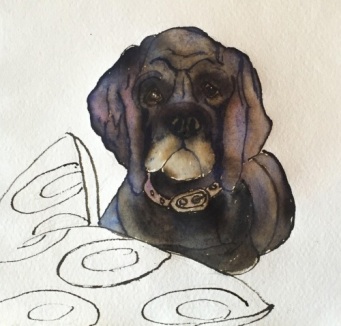 There are a few tasty items that she finds scrumptiously tempting beyond self-constraint. Each time, after she commits the crime, she hangs her head in shame, but to no avail… she cannot resist the tasty chewiness of paper products, especially the extra delectable, mouth-watering 100% recycled cotton rag paper kind.

I was photographing this painting, titled “don’t look up” and had placed another painting on the chair beside me.

My phone pinged and while I was texting a reply, I thought I saw something black pass behind me but when I looked nothing was there (she’s very sneaky) and then I heard the familiar sound of trouble – chewing!  Charli! I called out but it was too late… she was already internalising my art work.

I’ve tried to rescue the remainder of the painting.  What do you think?  Is it salvageable?

Thanks for visiting and hopefully you and your art have a safe week.

When in Rome do as the Romans do, when in Queensland sketch a koala while travelling on a train from the Brisbane airport to the Gold Coast.  This little koala was sketched from a travel brochure I picked up at the train station but I did see a koala in the wild the next day.  The koala was darker than I expected.  I am a somewhat concerned about its tree-choosing skills.  It was snoozing in a low spot, in a small, short tree that was extremely close to the road!

I’d like to try to sketch, Marlo, the Gold Coast Labradoodle.  Such a cute face!

Runaway Bay is a picturesque suburb on the Gold Coast in Queensland.  Winter is a nice time to visit Queensland, when it’s not too hot.  I stayed at the clean and spacious Runaway Bay Motor Inn.  It’s not flash but I liked the vertical lines of the palm trees, so I quickly drew it up while I was waiting for my ride.

I also visited Mullumbimby to deliver some of my art prints and greeting cards to the Tinker Tailor Dancer Tailor shop located on the main street.  Niyati, the owner, introduced herself to me at Salamanca Market last year when she bought some prints and cards for her business.  Here’s a small sketch of her shop, with cars (usually I try to avoid drawing cars :-)).  It’s a busy main street with a surprising amount of parked cars everywhere, including a long way down all the side streets. 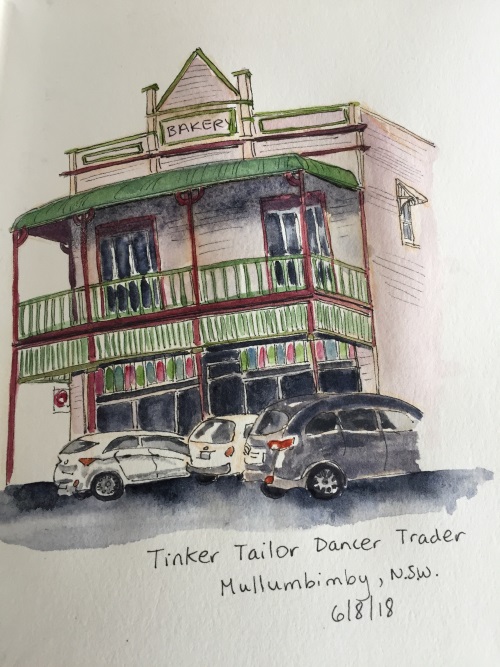 A chair and plant I sketched when I had a few minutes before I headed back home to Tasmania. 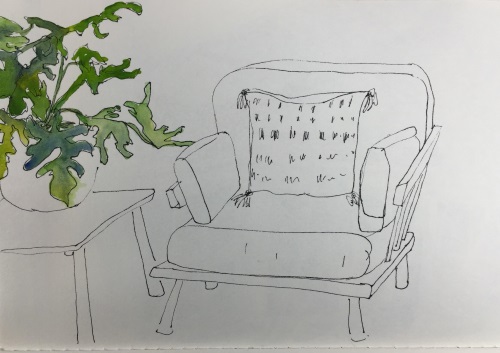 Thanks for visiting.  Wishing you a good week.

With winds blowing down trees and causing havoc on Friday, Saturday was approached with trepidation but there was no need to fear because it was a windless, mild day.

My first customers were two young ladies visiting from Taiwan. One was particularly drawn to my small original painting of orphaned grizzly bear, Grinder, housed on Grouse Mountain, Vancouver, Canada.  She said that her heart is connected to bears.  She lives on a mountain in Taiwan and loves it when she sees bear paw prints or their scratches etched on trunks of trees. Forests with bears are healthy forests she told me. Grizzly bears do not roam the forests of Taiwan, rather an endangered species, the Formosan black bear, also known as the white-throated bear. It is a species endemic to Taiwan. In Bunun legend, the Formosan black bears share a common ancestry with humans. Unfortunately, these bears face an uphill battle for funding to ensure their survival.

A couple, who had just arrived in Hobart from the mainland, wheeling their suitcases through the market, bought a ‘Glamour Girls’ pouch.  They are staying one night in Tasmania, coming only for the Scottish dancing event, held at the Hobart Town Hall.  They come each year for it and said it is a blast.  I had never even heard of the event.  Another pouch, featuring ‘Tu-whit & Tu-whoo’ is travelling to China and a large tote bag with my ‘Illustrated Tasmanian map’, is going to make its home in Japan.

A young family, building a house in Melbourne, bought a ‘Duck Crossing’ and ‘Sea Life’ prints to hang on their brand new walls.  A family, from Sydney, bought their young son a ‘Hayride’ print and their daughter, ‘Duck Crossing’.  ‘Kookaburra Rescue’ was purchased for a couple living in Norway.

A ‘Black & White + One’ print was purchased for a Sydney music room.  I was shown a photo of the room and the black upright piano on an iPhone.

A couple from Brisbane is taking home a ‘Sea Life’ print to add to their ocean themed collection of pictures hanging in their hallway, which currently consists of an octopus, seahorse and crab.

Duck Crossing was the most popular print this weekend.

A thought to ponder:  “Art is a line around your thoughts.” – Gustav Klimt

Thanks for stopping by.  Wishing you a creative and happy week,