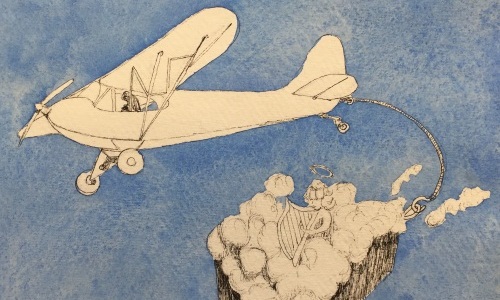 Today is the final day of the Inktober Challenge.  The prompt word is “slice”.  I painted this for my friend.  She almost got her pilot’s licence before she passed her Driver’s test, (her driver’s licence to drive a car took several attempts).  She LOVES flying. Any kind of flying.  She’s learnt to fly small airplanes, she’s been a passenger in helicopters and now she’s learning paragliding.  To her, flying is a slice of heaven!

Thanks for following and supporting me on my Inktober journey. 🙂

Hope everybody is having a ‘magical’ weekend! 🙂

October 27, 2018October 27, 2018 ~ theunfurlingartist ~ Leave a comment
The saying “four seasons in one day” resonated true today. The morning started off overcast, then in the early afternoon the heavens opened and the rain poured down on us, triggering the familiar sound of gazebo awnings’ pooling waters being regularly emptied before they dumped on an unsuspecting market-goer. Then the sun and wind made their presence, which was great because it dried the gazebo and side walls just before packing-up time. Then hail arrived. As I was unloading the car, it was bouncing off my head!
A couple, visiting from Geelong, Victoria, touring Tassie on a motorbike, and loving the roads, bought “Who says emus can’t fly?!”
Grandparents of not quite 4-week-old first granddaughter, named Wren, purchased a “Double Date III” tote bag for the parents. A “Duck Crossing” tote bag was purchased for another first granddaughter, 1 year old, Indigo.

A “Who, Who, Who are You? II” print was purchased for her mother’s Christmas present, who lives in Sydney and loves owls. She has a collection of owl figurines and the daughter thought it was something different than adding to her collection but still in the owl theme. A lady visiting from Melbourne, bought a “Glamour Girls” print for her girlfriend, who is a hairdresser.
Sisters visiting from Peru, South America, purchased a “The Three Amigos” print to take back with them. A young man, originally from Brisbane, now living in London, returned to Australia for a wedding, now holidaying in Tassie, bought some dancing emu cards as a souvenir. A young lady, from Michigan, USA, also bought some cards as a souvenir. They’re easy to fit into a suitcase!
I met a lady, whose husband is attending an Ornithological (the study of birds) International Convention hosted by the University of Tasmania. They are held every second year and she loves that she can join and visit places that she has never travelled to. This was her first time in Tasmania. Two years ago, the conference was held in New Zealand, which was also her first time visiting there. Very appropriately, she bought a “Double Date III” pouch featuring Superb Fairywrens.
The most popular print this weekend is: The Three Amigos
A thought to ponder: “A true artist is not one who is inspired, but one who inspires others” ~Salvador Dali
Thanks for stopping by,
from the Pjpaintings stall #30 at Salamanca Market.

Good evening.  I’ve drawn an Echidna for the prompt word “prickly”.  They are very cute little animals that I occasionally see here in Tasmania, usually when they are trying to cross a road, which stresses me out.  Often they take their time, nonchalantly waddling across, seemingly oblivious that their lives are at risk.

Not long now…and then Inktober will be finished.

“Muddy” is yesterday’s prompt word for the Inktober Challenge.

I say, ‘when in Rome, do like the Romans do.’  I think black and white doesn’t do this picture full justice.  I am keen to add some colour.

To make apple pies, you first have “chop” up some apples!

Thanks for stopping by and travelling this Inktober journey with me.  We’re nearing the end…

These are the two latest prompt words for Inktober.

For “Expensive”: expensive emu rings.  I haven’t had a chance to paint the picture yet. I think paint will make it easier to see the funky rings the emu is wearing and of course she is hoping to add to her collection.  A girl can never have too many rings!

For “Drain”: an idea that I don’t think was executed very well.  Drawing a picture a day often doesn’t give me the time I want/need to spend on a picture.  Here is the idea.

Now, onto attending to the next prompt word!

Hope your week is going well and thanks for stopping by. 🙂

Thanks for visiting and I hope your weekend is bubbling along happily.

At times, one could think it was snowing at the market. Large trees, lining the street, scattered masses of seed pods throughout the day and thousands floated everywhere.  There was literally a carpet of seed pods in my stall, and surrounding sites, with plenty of sneezing and nose-blowing taking place from all sides.

I met a young couple from Netherlands, who are travelling around Australia for a year, from Feb 2018 to Feb 2019.  They are travelling and doing nanny and cleaning work.  I asked what is a male nanny called?  They said an ‘Au Pair’ but that many Australians aren’t familiar with that term so they use ‘nanny’. I replied that I find that surprising with all the controversy surrounding Peter Dutton’s handling of the Au Pairs from France.  In humour, they said that maybe they’ll contact Peter Dutton if they decide that they want to stay longer in Australia. They purchased a 5” x 7” print, titled ‘Double Date’.

Residents from Emu Park, Queensland bought a ‘Beachside Chatter’ print.  A lady also from Queensland, but from the city of Cairns, chose ‘Duck Crossing’ and ‘All Ears’ prints from the Cheer ‘em Up series.  A couple were really pleased with their purchase of a framed ‘Two to Tango’ print.  It is going to be a gift for their son who has taken up dancing.

A mother bought a framed tractor print, ‘Hayride’, for their two year old son, who is fascinated with tractors.  She’s made him a tractor room and this will be another addition to the pictures of tractors.

Girlfriends visiting from Brisbane, had bought a print earlier in the week from Made in Tasmania, went looking for my stall today and found me.  They bought ‘Outback Glamping’ to give to a girlfriend that recently went to Uluru.

An American, with his Australian wife, who has been living in Melbourne for over 12 years, are taking a ‘Who, Who, Who are You? II’ back as their Tasmanian souvenir.

Near the end of the market, two ladies bought two prints each of ‘Lost Worlds’.  One lady said they were gifts for her sisters, one living in Ontario, Canada, the other in New York state, US.  Somebody else bought one earlier in the day too.

The most popular print this weekend is: Lost Worlds

A thought to ponder:  “When I say artist I mean the one who is building things … some with a brush – some with a shovel – some choose a pen.” ~Jackson Pollock

Thanks for stopping by,

Day 18 and 19 of the Inktober Challenge are asking for drawings relating to the words “scorched” and “bottle”.

I was going to draw a butterfly on scorched, dry, cracked soil but then the patterning urge took over.

I did this for “bottle”.  I used a black texta I hadn’t used for a long time and didn’t realised that the ink bled a purple colour.  It produced nicely accidental colours with the bleeding.

I’ve been busy drawing my little fingers off trying to keep up with the #Inktober2018 Challenge. I have fallen behind with posting but soon I’ll be caught up!

Inktober Day 14’s prompt word was “clock”.  I chose to draw the iconic Cat & Fiddle clock in downtown Hobart, Tasmania, which has been playing its animated rhyme since 1962, on the hour, seven days a week. (My drawing doesn’t do it justice). I did a quick sketch of it, with ink and pencil, and as you can see from the drawing, I was privy to viewing the nursery rhyme antics.  The cow, dog, dish and spoon made its appearance. 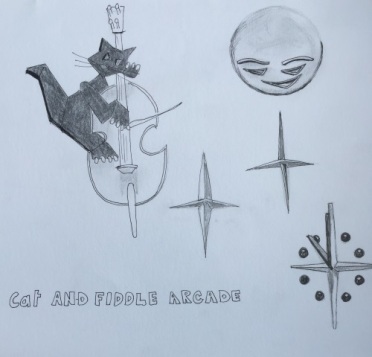 The next prompt word was “weak”.  Even the strong can feel weak when their heart is broken.

The next Inktober prompt word was “angular”.  I re-submitted my ‘star’ picture for this. I have now painted it, so it looks quite different than when it was just presented as an ink drawing.  The scene features a sugar glider, Tasmanian Devil, wombat and Tasmanian Quoll helping an emu family decorate their Christmas tree with gum nuts, Sturt’s Desert peas, Grevilleas and Waratahs, and of course a shiny star.  I’ve made it into a Christmas card, which is available on Redbubble. You need to enter “pjpaintings greeting cards” to find it. It will also soon be available at Salamanca Market, stall #30.

Today’s prompt word is “swollen”.  I chose to draw a beaver perched on its dam.  Few other animals can change their environment as a beaver can.  A small stream can soon become a delta when a beaver moves into the area.

I’m up to date with the Inktober Challenge and blog posting.  I hope you’re enjoying the journey as much as I am.

Thanks for stopping by. 🙂