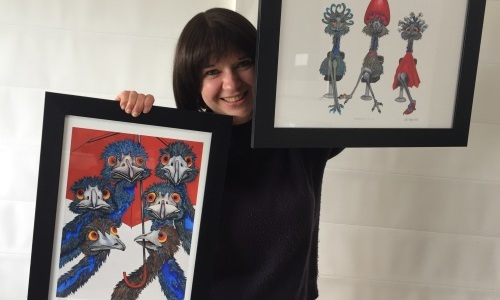 Fingertips and toes were cold this morning but by winter standards, the day warmed up quite nicely. It is summer holidays in the northern hemisphere and many international visitors have chosen Tasmania and Salamanca Market as their holiday destination, including the Travel Guides film crew. There’s also a Australian Football League (AFL) game being played tomorrow (Hawthorn vs Brisbane Lions) in Launceston so there were a few people at the market sporting their teams’ colours.

The first visitors to the Pj Paintings were two ladies from Hong Kong. They purchased a “Salamanca Saturdays” tote bag each. Then a framed “Hanging Out” print on display drew in a mother and adult daughter. The mother said that when she has grandchildren, she would buy it for the baby’s room. The daughter said in that case she’ll try to comply because she loves it and wants the print. They ended up buying it, and without a child being produced on demand. (lol)

A Scarlet Robins greeting card was purchased for a mother’s 90th birthday. An original small platypus painting, “Devilish Siesta” and “Bunk beds” prints were purchased by a family from Mexico. I gave them a discount because they had come from so far away and she very unexpectedly gave me a Mexican key ring. I was quite moved by the gesture. 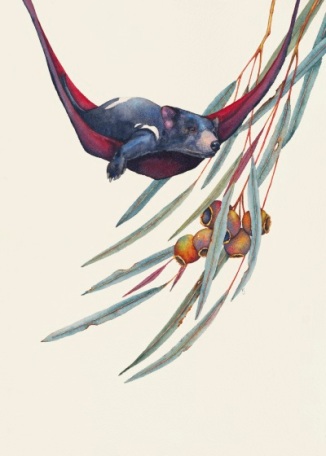 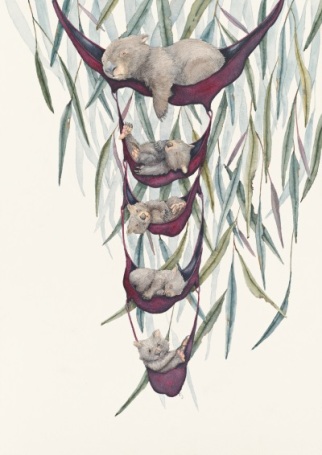 A local family bought a “Scarlet Robins”, “Fairy Wrens” “Entanglement” and “Lost Worlds” prints. They are redecorating their house and were looking for fresh, new art.

A “The Three Amigos” greeting card was chosen to post to an exchange student in Italy and a “Sleepyhead” print for a three year old nephew was purchased.

The most popular prints today were from the Sleepy Head series, featuring wombats, echidnas and Tassie devils.

Wishing you a week full of emu antics and joy,
from the Pjpaintings stall #30 at Salamanca Market.
P.S. Prints and tote bags are available at www.pjpaintings.com 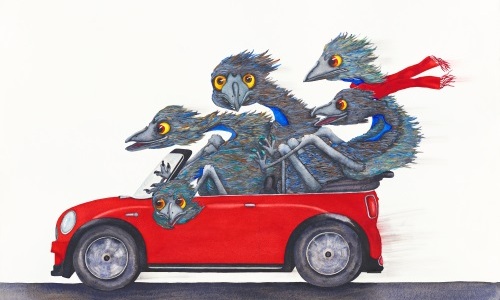 Once again the weather exceeded my expectations. I was thinking the temperature would be around 2 degrees Celsius this morning but instead it was a balmy 6 degrees when I drove out of the driveway at 6:45 am.

It was really busy at the market today.  I was told that about 60 delegates from Victoria were attending a Sutton Tools’ conference in Hobart but that would hardly account for the numbers perusing the market. There were a lot of school aged children from the mainland too. I thought their school holidays ended a week earlier than Tasmania’s.

A lady, living on a farm in central Queensland, bought four A-5 sized prints: “The Three Amigos”, “Double Date IV”, “Hayride” and “Glamour Girls”.  An x-Hobartian, now living in Brisbane, bought herself a “Salamanca Saturdays” tote bag and another lady, who used to live in Hobart, now living in South Australia, also bought the same bag. 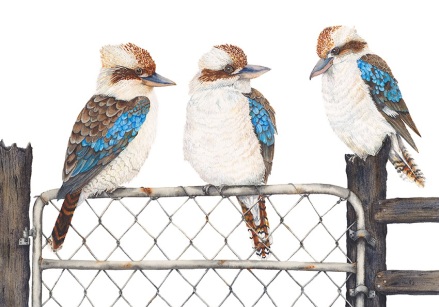 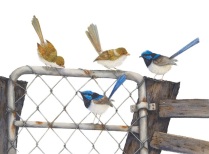 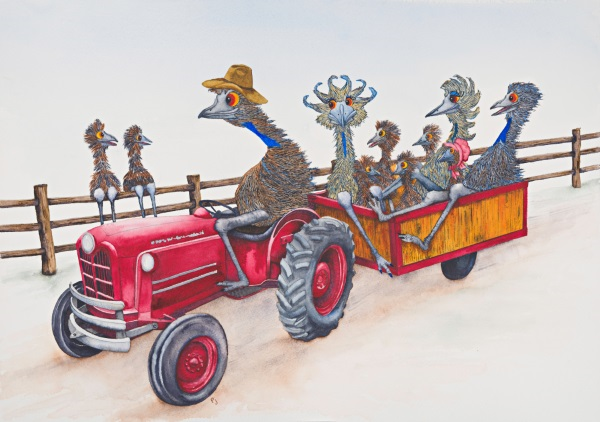 A mother, from Brisbane, met her daughter in Melbourne and they flew together to Tassie for a holiday to celebrate her 21st birthday, bought an “Afternoon Siesta” wombat print. Another mother and daughter pair, visiting from Devonport, Tasmania, bought three prints from the Cheer ‘em Up series to hang up in their Bed & Breakfast accommodation. Another mother and daughter, from Missouri, USA, living close to the Mississippi River, bought two cards: “What the Devil?!” and “Bunk beds”.

Two girlfriends, visiting from Queensland, bought “The Supremes” for their girlfriend. When they saw the print, they burst out laughing and instantly decided it was the perfect gift for their missing friend because the three do karaoke together.

A couple bought “Story time” and “Family Outing” as a gift for their new granddaughter.

The most popular prints today were the wombats.

A thought to ponder: “Clouds come floating into my life, no longer to carry rain or usher storm, but to add color to my sunset sky.”  Rabindranath Tagore

P.S. Prints and tote bags are available at http://www.pjpaintings.com 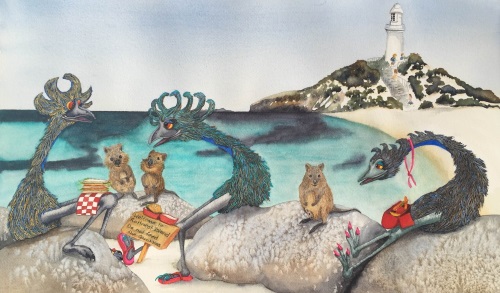 Last year, I painted Humpback whales to celebrate Sea Shepherd’s 40th anniversary and help raise funds for this non-profit conservation organisation whose mission is to protect and conserve the world’s oceans’ ecosystems and species. (All of these whale paintings are on my website: http://www.pjpaintings.com).

Sea Shepherd has asked me to support their fund raiser again. This time I focused on other sea creatures, all of whom are suffering in plastic and pollution riddled oceans.

This painting will be for sale in support of this worthy cause at Red Parka, 22 Criterion Street, Hobart, Tasmania, commencing Sept 5th.  It is now at Full Gamut, professional photographers, and then prints of it will be available on the Pj Paintings website.

Now, I’m working on my third and final painting of this series titled “The Bun”. 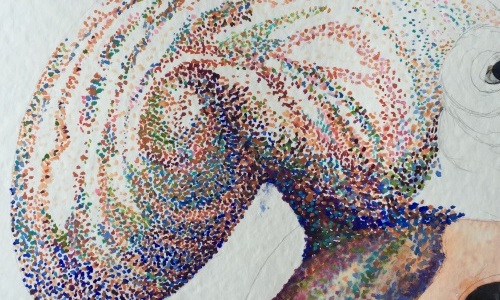 So, Yellow-tailed Black Cockatoos have a short crest on the top of their heads compared to the other cockatoos’ crowns that they flaunt and display ostentatiously.  Feeling slightly inferior, this cockatoo set about to find a hairdresser that does feather extensions but alas there are none to be found in Tasmania. An octopus seems like a good compromise, and fortunately for this cockatoo, it found a very obliging one to crown its head with long, flowing, attractive tentacles.

Sea Shepherd Australia is a non-profit conservation organisation whose mission is to protect and conserve the world’s oceans’ ecosystems and species. This painting will be for sale in support of this worthy cause.  It’s been a marathon effort. 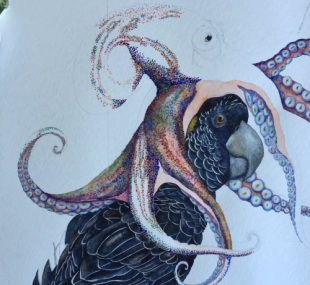 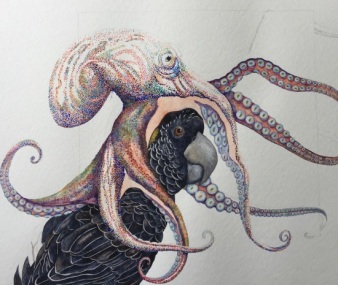 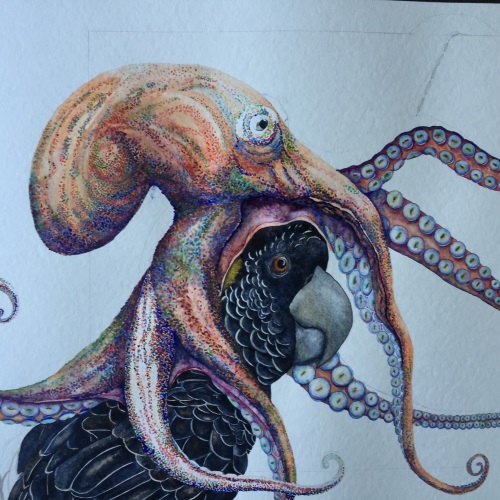 I don’t have to go into work tomorrow so I should be able to finish it tomorrow, all being well.  Fingers (tentacles) crossed!

Thanks for stopping by and I hope the rest of your week goes swimmingly. 🙂 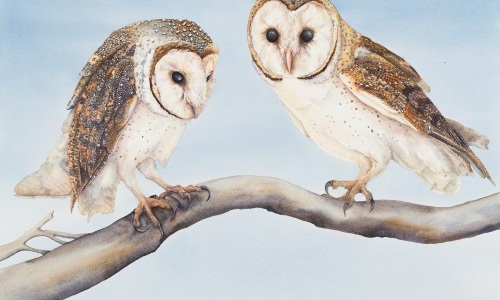 The weather wasn’t as kind to us today as previous weeks, but it was warmer than I thought it would be.  Despite it raining off and on all day, it didn’t stop people from visiting.  I think the school holidays and the Festival of Voices helped.

I had two couples buying prints at the same time when one said to the other that they looked familiar.  It turned out they were both from Newcastle, NSW.  One couple bought a “Double Date III” print and the other “Richmond Bridge, Tasmania” to go with the “Glamour Girls” print that they bought 2.5 years ago that hangs in their bathroom.

A lady visiting from Arizona, USA, bought a small original painting of a kangaroo that I painted.

Another original painting, a Black yellow-tailed cockatoo, was spotted by a young boy, who pointed it out to his father, who in turn bought it along with a “Be Whooo You Are” print.  They are birdwatchers and are planning to do some in Tasmania as they tour around in their camper van.

The recycling pair came by again this week. When my next-door stallholder gave her a hug, the crown decorated with forks, spiked her eye. Recycling costumes are dangerous! J She ended up buying a “Salamanca Saturdays” tote bag for her mother’s birthday, who lives in New Zealand. 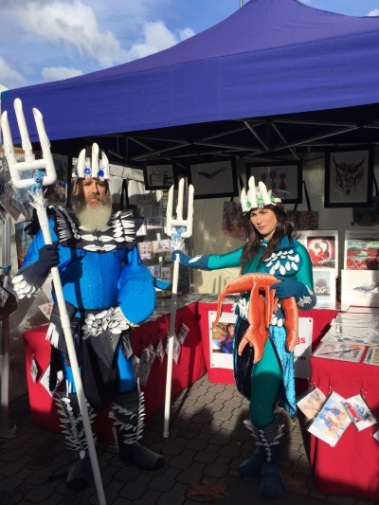 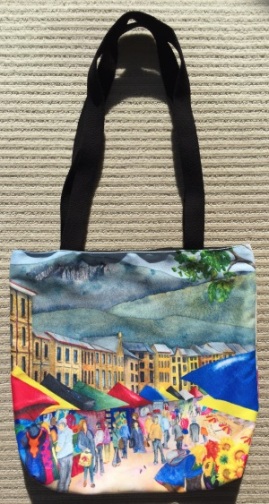 A “Salamanca Saturdays”, “Glamour Girls II” and a “Family Outing” print are travelling to Cairns. A “Christmas Siesta” is going to be making itself at home in Perth and an “Afternoon Siesta” will be settling itself in Brisbane. The couple from Brisbane made three visits to the stall and said that they couldn’t get the image out of their head, so they had to buy it.

A repeat customer, who had previously bought “Who, Who, Who are You? II” for herself and friend, and “Who, Who, Who Merry Christmas” bought a “Be Whooo You Are” and “Double Date III” print.

Thankfully, the rain stopped about two hours before packing-up time so most things were almost dry.

The most popular prints today were the wombats and whales.

A thought to ponder: “Painting is just another way of keeping a diary.” Pablo Picasso  (Maybe Pablo was an urban sketcher!! J)

Wishing you a week full of emu antics and joy,

P.S. Prints and tote bags are available at http://www.pjpaintings.com