Skip to content
Well, it was supposed to get up to 19 degrees Celsius today. Maybe it did, I’m not sure, regardless, it was a mild and sunny day.
The morning started off with a visit from a young lady, originally from the UK, but she has lived the past ten years in Melbourne and is now living in Tasmania, doing a Marine Biology degree with the University of Tasmania. She purchased “Suspended”.
A lady, purchased a Superb Fairy Wrens card, to give to her sister-in-law, who is about to become an Australian citizen. She studied for hours and was very nervous about sitting the test and all to no avail because when she rocked up for the citizenship test she was told that she didn’t have to do it because she is over 60 years old! Family members advised her to become a citizen just in case her husband died before her and Australia decided to deport her. This was said in seriousness and it’s not surprising, especially with the treatment a Tamil family is currently receiving. Peter Dutton, Australia’s Minister for Home Affairs, claims that his hands are tied, and refuses to use ministerial intervention powers, yet he did intervene in 2015 to prevent two au pairs from being deported. It is distressing to view this family’s ordeal and that they will probably be forced to go back to Sri Lanka, where her fiancé was burned alive. They feel they will be in great danger, especially with all the media attention that their case is getting.
A man from Manchester, UK, attended a fire truck conference/exhibition in Melbourne (he works for company that makes drawer sliding mechanisms for fire trucks) decided that because his flight leaves Melbourne at 9:00 tonight, that he was able to catch a 9:00 am flight to Hobart and a 4:00 pm flight back to Melbourne and then continue onto the UK. Seems like a lot of travelling before a long haul, anyways, he’s taking a “Bunk Beds” and a “Salamanca Saturdays” print with him.
A mother bought a “Bunk Beds” print to give to her daughter to take to the UK with her for a family member’s birthday.
A lady, from Launceston, with a paper bag and extra cardboard from her last purchase, bought “Hayride” and “Under My Red Umbrella”. She also showed me a beautiful frame that she bought for the A-3 sized print of “Family Outing” that somebody had given to her. 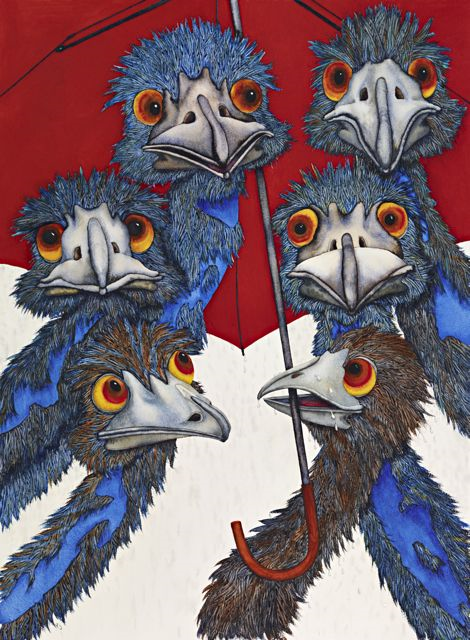 A mother and adult daughter bought “Bunk Beds” and “Afternoon Siesta” to hang in the hallway of their house in Melbourne.
A lady, who is in Tasmania attending a civil engineering IPWEA conference, purchased  “Spiky Bunk Beds” and “Sleepy head” prints. Her and partner, drove their caravan 10,820 km, starting their trip from Busselton, Western Australia last month. They visited 8 states and territories in four weeks. 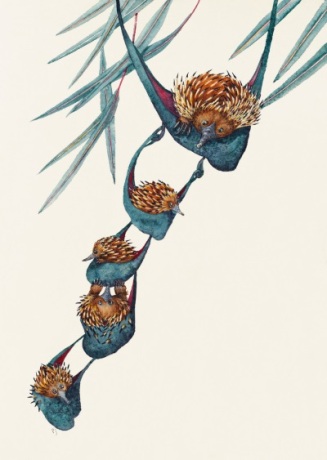 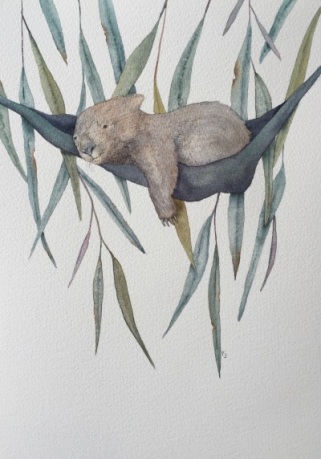 Unfortunately, there are sometimes casualties at the PJ Paintings stall. 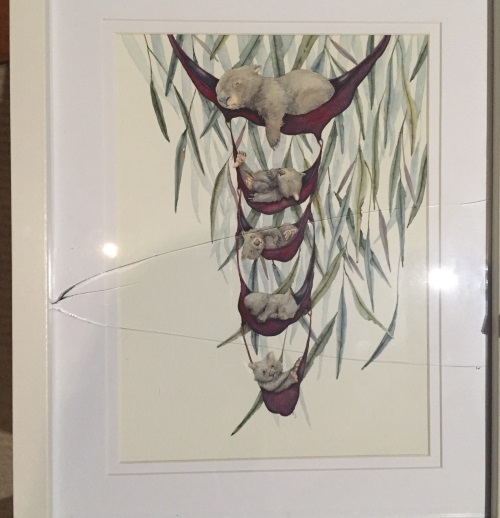 The most popular prints once again today were Bunk Beds and Afternoon Siesta from the Sleepy Head series.
A thought to ponder: “It is good to love many things, for therein lies the true strength, and whosoever loves much performs much, and can accomplish much, and what is done in love is well done.” ― Vincent Van Gogh. I like this, well said Sir Vincent.
Wishing you a week full of emu antics and joy,
from the Pjpaintings stall #30 at Salamanca Market.
P.S. Prints and tote bags are available at http://www.pjpaintings.com
Advertisement