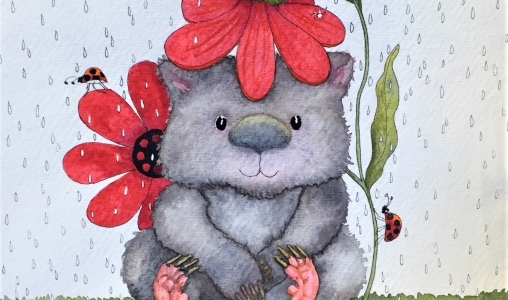 We’ve entered the winter months in Tasmania: dark at 5 pm, rain and snow on the mountain.

Oh-oh, it’s starting to rain, but not to worry, lady bug friends are helping to keep wombat dry.

“Flower Umbrella” original water colour painting is approximately 20 x 20 cm and was available for purchase at: www.pjpaintings.com/collections/original-paintings (sorry, it has just sold, to somebody who coincidently lives on the same street as me, in Tasmania!! It’s a small world). 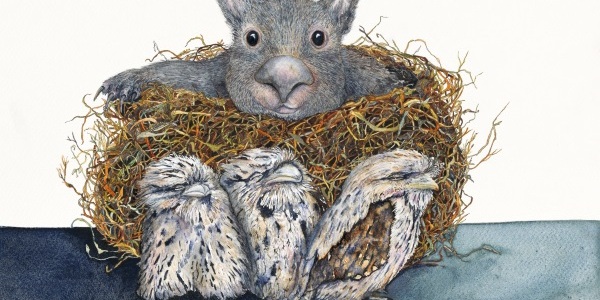 The events started yesterday, when I was packing the car for Salamanca Market. A jack jumper had decided to climb onto a box that I picked up to put in the car. Of course it bit me and my hand swelled up overnight. I wish I had thought to take my ring off immediately because now I definitely can’t! Here’s a link if you’d like to read more about this rather aggressive insect that has a nasty bite https://dpipwe.tas.gov.au/Documents/jackjumperfactsheet.pdf

After the car was packed, I headed off to the Summer Salt Music Festival held in the Botanical Gardens. It was awesome but it made it a short night with the 5 am wake up for the market the next day.

The line up was Emily Wurramara, Boy & Bear, John Butler, The Teskey Brothers and finishing off with The Cat Empire. There was a strictly no dancing rule.

but… when The Cat Empire came on and started playing, everybody was up and dancing. The officials definitely had their work cut out trying to get people to only chair-dance.

Then it was up at the crack of dawn and setting up the stall in the dark.

It was a very busy day with people from various places from the mainland and backpackers from overseas visiting. I had caravaners from Queensland that are touring around Tasmania for 7 weeks buy “Afternoon Siesta” and “Spiky Siesta” prints. I had French backpackers, who are here for another 6 months also purchase an “Afternoon Siesta” print. A couple from Melbourne stopped in. She told me she had to get “Two to Tango” because she was from Argentina. It’s her fourth time visiting Tasmania but her first time to Salamanca Market.

Another couple from Queensland purchased three prints: “Surfing Clifton Beach, Tasmania”, “Joyride” and “Glamour Girls”. Backpackers from Chile bought an A-5 sized print of a wombat in a hammock and a couple bought an original of a platypus I painted to go with a children’s platypus book. They’re sending both to their 3 year old nephew living in Switzerland.

While a bunch of people were in my stall, a man told me that a lady just took one of my prints (Double Date IV”) without paying for it. I caught up with her and asked if she wanted to pay for my print and she said that she put it back on the rack. I asked her, “why is it in your bag then?” It was poking out of her bag and I could clearly see it, so I showed it to her. Then she said she got it from around the corner and started telling me that it was selling everywhere. She said she was going to report me and then started getting aggressive with the people who saw her take it. Eventually she moved on but it does leave you a little shaken.

My credit card gadget worked for about 2 hours and then it just wouldn’t connect so the tapping mechanism didn’t work, leaving me with the only option to enter everything in manually, which was a pain. Then the rains came, just 20 minutes or so before we packed up. Not long enough to let things dry off, so things are drying in all sorts of places in my house.

Time for a cup of tea… and process the events of the past 36 hours. I hope that your day is going great.

Cheers, from Patricia (PJ) Hopwood-Wade (all the images shown are available on my website at http://www.pjpaintings.com)

You know the feeling when you can hardly keep your eyes open and you are well and truly ready for a nap, while at the same time this doesn’t seem to be the same case for the little people in the family. They are alert and ready for more adventures. I hope that Mother-Wombat gets her well-deserved rest soon??

Prints are available at https://pjpaintings.com/collections/wombats

I hope that you are enjoying a peaceful and restful weekend.

I painted the 15th and 16th penguins. Four more to go!

Then I have managed to maintain the momentum and paint number 17 penguin. I’ve started drawing more of the nest too. It feels a bit like Doodle Art. That was all the rage when I was a teenager. I’d save up my money to buy the Doodle Art that came in a tube with coloured textas (felt pens). They were themed posters to colour. They are “vintage” now. I’ve coloured in THE SEA and BUTTERFLIES. They are long gone now.

Anyways, the nest reminded me of doodle art days.

Hope you’re well and can enjoy a spell of mindless and relaxing doodling today.

I know you are not supposed to have favourites but I have developed an affinity with this little penguin. I think its so cute and I’m quite loving it.

This is my favourite penguin of the family group so far. I still have many more to paint.

I hope that you have been able to enjoy some of your favourite things today. Cheers from Pjpaintings

I started this painting, loosely inspired by the Goldilocks and Three Bears story, a few weeks ago. It feels like it is going to take a year to finish!!

I really like the colours of blue and beige. I think those two colours sing and are lively together. These two dominant colours also attracted me to try to paint this idea of fairy penguins and a wombat that formed in my head about two years ago.

I hope that everybody’s weekend is travelling along well.

Thanks for stopping by and hopefully next time you visit, there’ll be more penguins to see. Cheers from, Pj Paintings 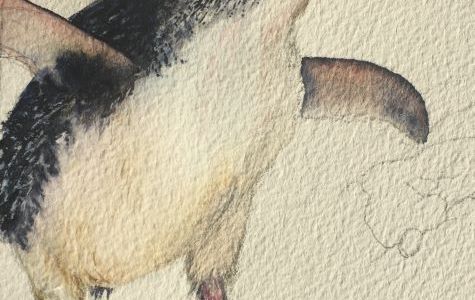 I didn’t get much time to paint today but I did add one more fairy penguin to my picture.

Eventually all twenty will be painted. This painting that I’m working on is telling a story similar to that of Goldilocks and the Three Bears, but an Tasmanian-ised version. Here in Tasmania, there are no bears, not even koala “bears”, who aren’t bears, rather they are marsupials, so they can quite easily be discounted from this story. But there are our regular fairy penguin visitors, the smallest species of penguins.

You can imagine the surprise when twenty fairy penguins waddle up the beach to discover a wombat in their nest!! (I haven’t drawn the nest as of yet).

I’ll keep bringing more penguins to life over the next few days. Take care and thanks for stopping by, PJ Paintings

It’s almost three years ago now that I sketched an idea for a painting of fairy penguins. I feel excited that I finally have started it today.

The fairy penguins are the smallest of all the penguins. They breed in Australia, including Tasmania and Bruny Island. I’ve visited Bruny Island several times and seen them come onto shore. They are just gorgeous and it is such a privilege to see their cute, waddling selves.

I hope that you have a chance to visit magical Bruny Island and see these little fellows in real life too. But, if not, there’s a two-dimensional large colony coming on shore and heading up to their nests and here are some fairy penguins in Victoria, Australia.

It is a little too squishy for three tawny frogmouths and a baby wombat to share a nest, so the frogmouths have generously given the best room in the house to their guest, while they try to get some shut-eye on the outside premises.

It’s a tight squeeze but this little wombat has managed to get comfy in this share house (wombats have such cute, gnarly feet!). Luckily wombats and Superb fairy-wrens are such gentle souls.

Prints of my “Share house” and “House sharing” paintings are available at http://www.pjpaintings.com under the Animals tab.

I hope that you are keeping well and safe. 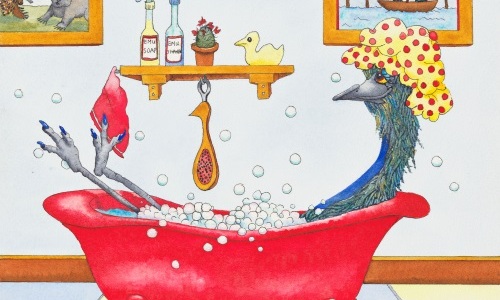 I was asked to paint three different emu scenes to be made into tiles for a laundry room for a house that is being built in Hobart, Tasmania. These are the three ideas I came up with.

These are available as prints at http://www.pjpaintings.com

Thanks for stopping by and take care from PJ Paintings