We had a lively and happy sketch-meet today in the suburb of North Hobart, followed by a throw-down at the Providence Cafe. I chose to sketch this scene. The bright blue front door was a strong feature that caught my eye.

My viewpoint for the sketch:

Take care and thank you for sharing my art journeying. 🙂

For today’s urban sketch meet we met at a funky little cafe in North Hobart called Pigeon Hole Cafe. Our small group of eight sketchers dispersed and drew a variety of buildings and houses. The hills and slopes added an extra level of perspective-challenge.

I chose to undertake this challenge on Goulburn Street. I liked that I could see a little of kunanyi/Mt Wellington just peeking over the roof of the building.

This is what I drew and started painting outside before I decided it was time to seek warmth and a well deserved cup of coffee.

…. and the finished wonky attempt.

I hope that everybody has had a lovely weekend and wish you an equally lovely upcoming week.

Thanks for dropping in for a read. Cheers, Patricia (PJ)

I had a coffee with a friend in North Hobart, yesterday. While my friend was finishing a phone call, I did a very quick sketch of this house.

There are so many gorgeous Federation houses in North Hobart.

I must get myself out drawing more! 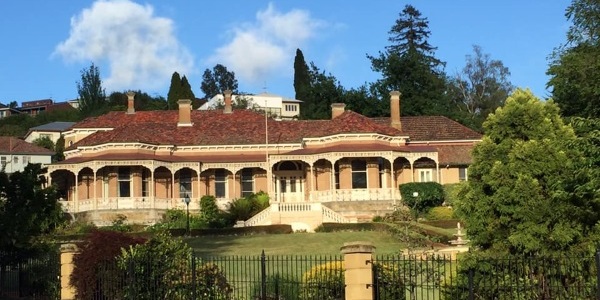 Yesterday, we had a great turnout, and hence, an invigorating urban sketching session, reinforcing the saying “the more, the merrier” as was such the case. We dispersed, picked our building to tackle and went to work.

I tried this duplex on Elizabeth Street. I took the photo about an hour afterwards, so the shadows had changed somewhat. I still ran into some perspective difficulties, but such is the learning process.

Afterwards, we had a coffee and our throw-down at the State Cinema, a very cool, stylishly restored cinema that has been screening moving pictures since 1913. Most of the Hobart sketchers group took on the Lyndhurst ornate house (feature photo). We had two new participants and a sketcher return from “their best holiday ever”, visiting Iran. We took turns perusing her amazing travel sketchbook and photo book. Stunning.

Upon my return home, I found myself still in the painting mode. So, I painted an orange-bellied parrot (thanks to Stuart J. Smith for giving me permission to use his photograph). Orange-bellied parrots are critically endangered with less than fifty parrots thought to exist in the wild today. With all the horrible bush fires, I wonder if they’ve fallen victim to the ferocious flames and if that number is even lower now?

They are not endemic to Tasmania but it is one of only three species of parrot to migrate. The orange-bellied parrot breeds in Tasmania and it winters in South Australia and Victoria. 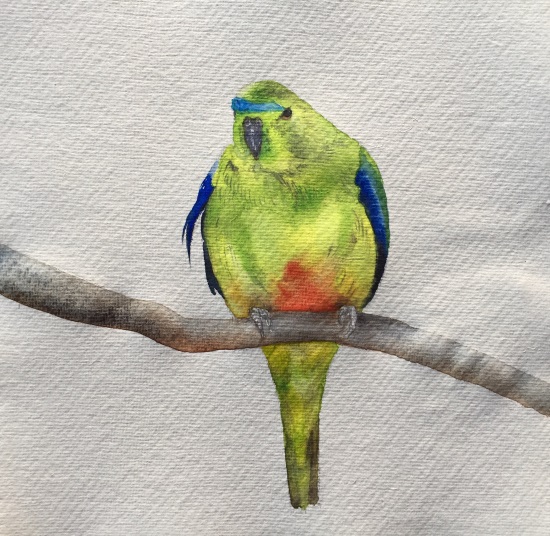 Last year, at Salamanca Market, I met a retired university professor from the US and he is an avid birdwatcher. He has come to Tasmania every year for two or three decades. He bought virtually all the original paintings of endemic birds I painted. He’s back in Tasmania and sought me out at the market on the weekend. He said that all my paintings are framed and hanging at his residence. He’s 83 years old. He told me that they won’t let him rent a car/drive but some Tasmanian University contacts are taking him birdwatching and he’ll be doing some work there. Anyways, he was disappointed I didn’t have any original bird paintings and asked me to paint “lots” during the week. The Orange-bellied parrot is the first. It’s a start…

wishing everybody a safe week