Skip to content
April 23, 2018April 23, 2018 ~ theunfurlingartist ~ 2 Comments
We did a family walk along the scenic Gold Creek in Golden Ears Provincial Park, B.C., Canada and saw lots of interesting things along the way.
In the forest we came upon this scene – a tree piggy backing on the back of a stump. 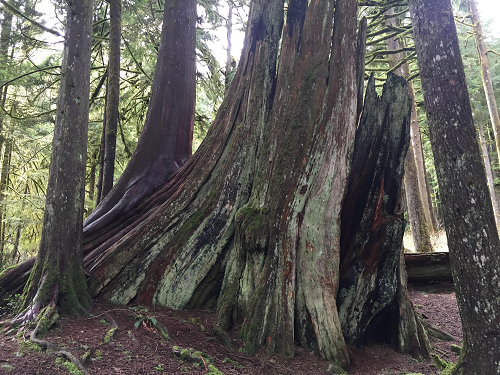 The colours and upward streaks on the stump reminded me of some paintings that the famous Canadian artist Emily Carr has painted.  I love the way she has depicted the west coast’s forests. 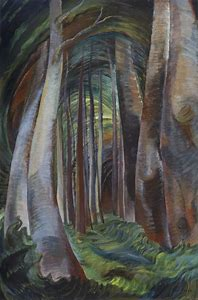 The moss on the tree created some funny cartoon like images.  This one looks like a bird that has been flying for a very long time, wearing a pilot’s cap with ear flaps and has snow (green snow) building up on its beak.

And this one, this is stretching the imagination, but I think that some of the moss clumps look like koalas.

We came across a water-logged fungus, a Salamander, Canada Geese, squirrels, orange breasted robins and we saw a Bald Eagle flying over Alouette Lake.

At the start of Gold Creek, we came across this very typical Canadian scene that often adorns the front cover of magazines.

Gold Creek is fed by water from glaciers and in some parts the creek is a stunning emerald and turquoise colour.  The walk is about 1 km to reach the lake at the end of the creek.

It is a really scenic walk for all the senses: beautiful sights among the smell from cedars and Douglas fir.

Thanks for visiting and I hope the upcoming week is a great one for all. 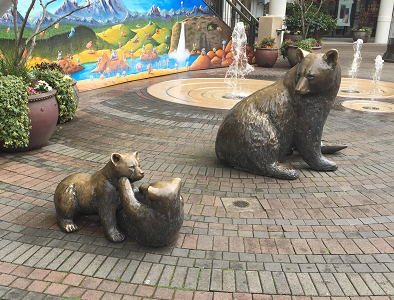 My ride from Vancouver to Edmonds, USA (a suburb in Seattle) was quite memorable.  The train was scheduled to leave Vancouver at 5:30pm.  When it got closer to 6pm, it was announced that the brand new locomotive wasn’t communicating to the older control system, so the train was going to be turned around and they will drive the train to Seattle using the back locomotive.  So, we travelled to Seattle backwards.  All our seats were facing forward but now they were backwards, which didn’t matter much because it wasn’t long before it was dark and you couldn’t see the passing scenic views.  The seats were comfortable and spacious.  Heaps of leg room compared to flying!

When travelling, the cars on the tracks do sway quite a bit and I found it difficult for painting or drawing, but I did this quick sketch of the passenger sitting across from me.

When we arrived at the US/Canadian border, at the Peace Arch, the American border guards came on board to collect train passengers’ Declaration documents and sight passports.  When a border guard collected the man’s, sitting across from me, Declaration card, they asked him what kind of meat is he bringing into the country?  He answered, “what do you mean?”  The border guard answered, “you’ve ticked meat on your Declaration card.”  He replied, “oh, that was my meat sandwich! I ate it.”  That was rather funny.

About an hour out from Edmonds, the train came to a screeching halt.  An announcement was made reporting that “we have a situation”.  I immediately thought that there might have been a person on the tracks.  Many train drivers suffer Post Traumatic Stress Disorder from this type of extremely distressing situation.  Thankfully, after a while, they announced that there was somebody on the track but they were able to stop in time and he was not injured in any way.  We waited for the police to come and safely remove him, did a brake check and then we were on our way again.  I was really amazed that we were able to stop in time, with presumably one less braking system when travelling with one non-functioning locomotive, and with the diminished visibility with the darkness.

The train arrived in Edmonds, without further incidences, an hour late.  Despite the delays, I prefer travelling from Vancouver to Seattle by train than plane. 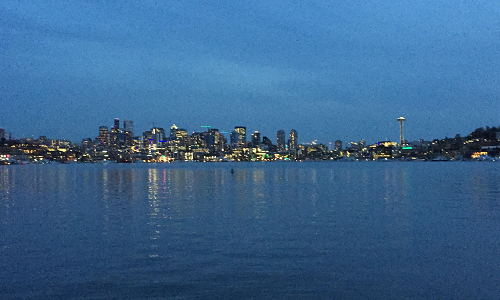 Although Seattle’s Space Needle was being refurbished, some sections, including the restaurant were closed to the public, it was still worth going up and seeing the view.  I can’t say that the views were spectacular on the day I went but they were impressive. They’ll  be more impressive when viewing from the ceiling-to-floor, and floor, glass observation deck, which is currently under construction.

While waiting in the queue for the lift down, I started sketching the view below.  I didn’t get too far with the sketch before being escorted into the lift. 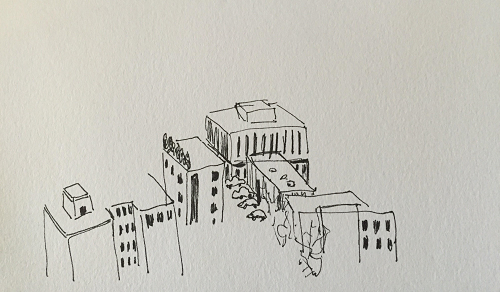 This is the view that I started to sketch.  A bit ambitious!  🙂

I took this photo of the reflection of the Space Needle in one of Dale Chihuly’s large glass marbles.  His art gallery, with garden, is next door to the Needle and it is quite memorable.

While waiting for the bus to go home, I started sketching the building on the corner.  I got a bit further with this drawing, but still have a row of windows and paint to add.  Macy’s is one of the main department stores in US.

Thanks for stopping by and take care.

I feel like I’m home when I smell the cedar and Douglas fir.  My brother and I usually do a walk in the forest whenever I visit Vancouver.  It was raining and hailing when we were driving to the starting point. We weren’t sure if the walk would go ahead but upon our arrival, the rain ceased and blue skies made their presence!

This time we did a walk to Jug Island, which I’ve never been to before.  The walk was about 7 km return.  The trails are well marked and the climbs up or down are not too steep.  It is well worth the effort because Jug Island is spectacular.

We passed by some fungus and plenty of Skunk cabbage but the cabbage was not at its stinky stage of life.  It had hardly any smell.

There were plenty of water birds near the shores of Jug Island.  It was a breathtaking and glorious day. 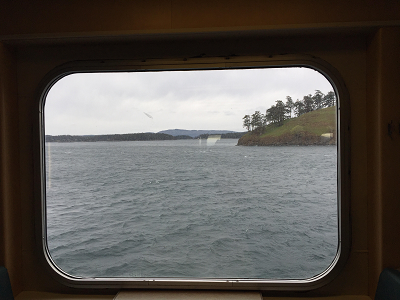 The Washington State Ferry to San Juan Island and Sidney on Vancouver Island was great.  There are some unexpected nice touches.  The food options weren’t impressive but the rest impressed me.

The ferry also had historical photos displayed.  These two were taken in 1912 and 1916.

Sidney’s suburbs have well maintained, nice looking houses, flower beds and yards.  The main street is neat and tidy with many sculptures, wide sidewalks and flowers.

If you can, I think that the ferry is a more pleasant way to travel from United States to Canada than flying.  You can avoid some of the more intense security measures, for example, body scans when you travel by ferry, and the ferry ride is scenic and fun.

… and sailed into sunny Friday Harbour on San Juan Island at around 4pm and immediately rented bikes and started exploring the island.  We rode from Friday Harbour to American Camp, approximately 21 kilometres in total.  It was a very picturesque ride, with many super well-maintained, white window-trimmed houses on 5 acre lots and an intriguing corner store with a bunch of medium sized totem poles at various states of uprightness.  Unfortunately, I wasn’t able to get a photo of this store.

The roads had good bike lanes all the way.

At the destination point: American Point. 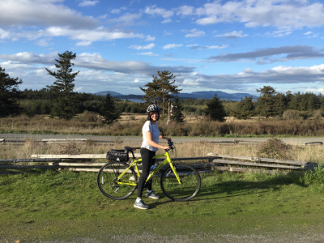 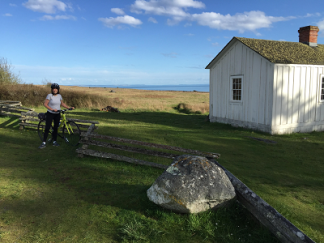 I was thankful that I was able to ease my body into a hot tub after the bike ride.  If you haven’t ridden a bike for a while, I find that it is your bottom that hurts the most.  While soaking, two deers walked by.  Quite surreal.

Thanks for stopping by and a happy weekend to all. 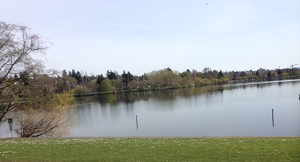 Across the street from Green Lake in Seattle, are these cute houses. So many houses here have nicely contrasted trimmed windows.

I decided to leave the tree on my side of the street unpainted.  Do you think that works or that I should have painted it?

While in Seattle, I visited an 18-foot troll that decided to take up residence under the Aurora Bridge in Fremont, Seattle, on Halloween in 1990.  I was told by locals that the bridge’s underneath area was an undesirable, littered and drug-dealing space. I love how art solved the immediate “ugly” problem and used a lovable “ugly” to turn an area that was avoided to a tourist hot spot. 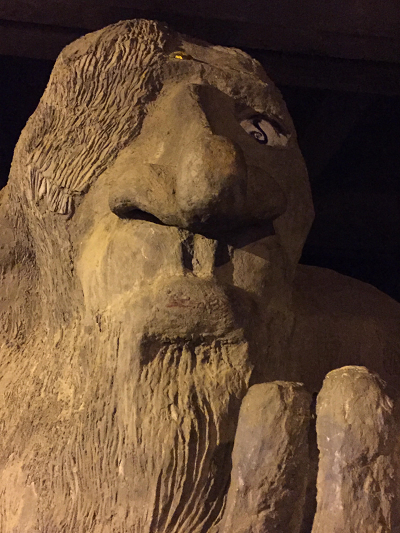 A Volkswagen Beetle hubcap is used to make a solitaire, glaring, shiny metal eye with the fearsome, shaggy troll crushing the remainder of an actual Volkswagen car in its left hand, which housed a time capsule of Elvis memorabilia; it was removed after the car was vandalised.

The Fremont community annually pays tribute to the troll on October 31st with a moveable “Troll-o-ween” party, starting under the bridge and meandering to other art sites and events.

The troll’s vicinity keeps popping up on the news with strange incidences occurring.  For example, in 1998, a bus fell off the Aurora bridge, crashing on top of an apartment building next to the troll. Also, in 2013, the troll’s midnight snack remnants featured on the news when it carelessly left over a dozen bloody sheep skulls in its adjacent yard.

The concrete, steel and wire sculpture was created by Steve Badanes, Donna Walters, Will Martin and Ross Whitehead. It was sculpted by house builder Steve Badanes, who had never made a statue before.  The city asked the Fremont Arts Council to launch an art competition to rehabilitate the area and the public chose their favourite.  Badanes’s design for head-and-shoulders sculpture won the contest.  Art critics disapproved of the public’s choice but the community has loved the Fremont Troll from its initiation.

Busloads of tourists from all over the world stop to take photos with the troll.  It is also a celebrity and has been featured in films like The Twilight Saga, Death Note, Sleepless in Seattle and more.

Sleep tight, Fremont Troll.  You are an awesome sight.

On a semi-rainy day we hopped on the ferry at Edmonds, a suburb of Seattle, and sailed into Kingston to explore.

The gangway was decorated with great art made from local beach findings. 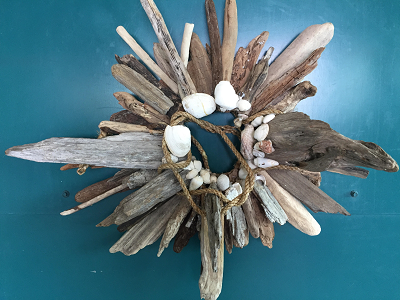 I sketched this cute boy in his puffer jacket drawing at a table on the ferry. 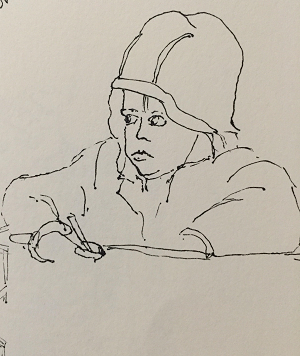 We passed by this large quilt displayed in a shop window.  I only captured a small portion of it.  I’ve never seen one like this where in between the petals it is just left open (fabric-less).  I think it is quite original and creative.  I’m sure many a quilter may be uncomfortable with this being declared as the finished state.

We had lunch here.  I am surprised to see quite a heavy French influence and presence in Seattle. 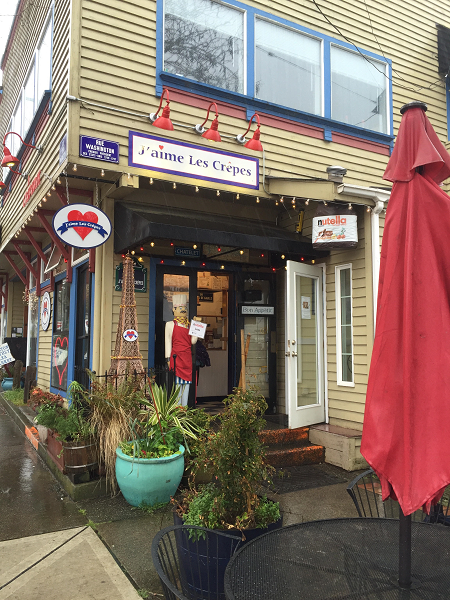 We walked along the water… 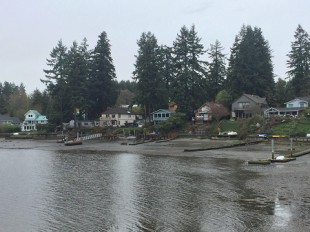 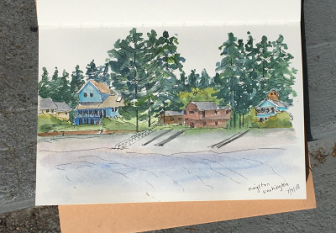 and then took the ferry trip back to Edmonds, Washington, USA for more Seattle sights and day trips.

Thanks for stopping by.  Until next time, take care. 🙂

I love the grand Roman Colosseum inspired Vancouver Library. It is a stunning building. 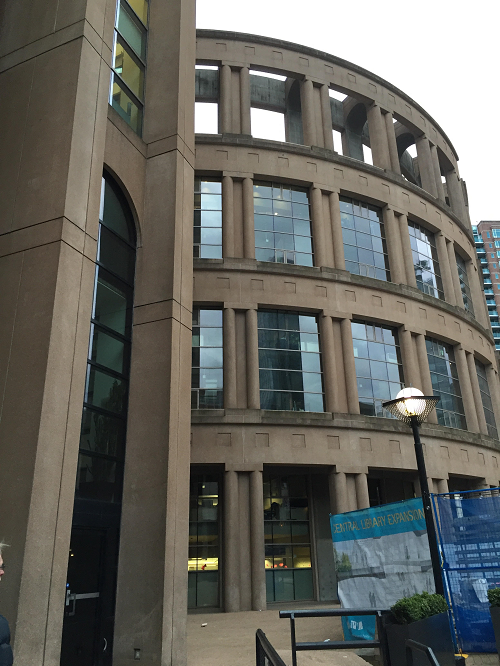 It is a multi-level building with open crossways connecting each floor.  When I first visited the library, soon after its opening, I wondered how long this would last before all the crossways would be enclosed?

If somebody dropped an iphone or book, it could knock somebody out cold below. 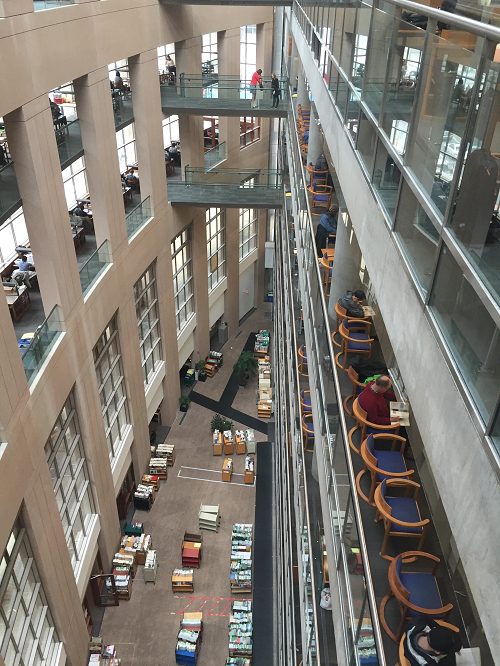 I’m really happy that all these years later, the open-plan persisted, and with the stunning art, its luxurious feel. 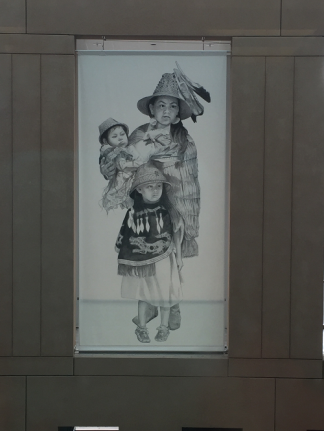 It is a clean, modern, busy and well patronised place.  This library houses so much: city views from the windows, a massive children’s section, thousands and thousands of books and magazines, multiple filing cabinets of maps, census records and more, a box light and so much more.

This library is well worth a visit.  It really is an impressive place.