Skip to content
I drove in darkness up the driveway to go to Salamanca Market but thankfully the days are still mild, even in the early hours of the morning.
It was a busy day for tote bags and pouches today. A couple from Washington, DC, USA, bought a small ‘Bunk beds’ print and a ‘Salamanca Fresh’ tote bag and a UK couple, a ‘The Three Amigos’ pouch and a “Salamanca Saturdays’ and ‘Scarlet Robins’ tote bag.

A lady, from Toronto, Canada, now living in Wisconsin, USA, purchased two A-5 size prints of ‘Bunk beds’.
A ‘Hanging Out’ print is making its way to Auckland, New Zealand. He was telling me that there is a north, south, west and east. I said that there is a north, south, west and east in most places (lol), but then he elaborated where the wealthier suburbs were and so on.
‘Hanging Out’ made its debut today. A little wombat thought the hammock was looking a little plain, so being a pro-active and industrious marsupial, went about decorating it. Now that it looks much better, and feeling sleepy after all that hard work, it settled down for a nap. I’ve added ‘Hanging out’ on my website: http://www.pjpaintings.com
A framed ‘White Faced Scops Owls’ is heading to Canberra, and a ‘Thunder’ print was purchased for two and a half year old, Jack. 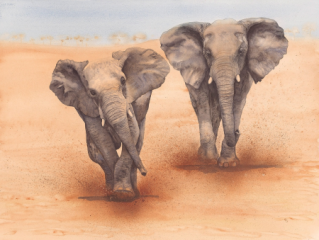 A lady stopped by to tell me the happy story of ‘Glamour Girls’, hanging framed at her hairdresser’s in Ballarat, Victoria. She said it was such fun, looked so good and is just perfect for a business owned by three sisters.
The most popular print today is: Bunk beds
A thought to ponder: “To draw you must close your eyes and sing,” Pablo Picasso. I can’t say I do this. Maybe that’s why I don’t draw like Picasso??!
Take care and I hope that your upcoming week is great,
from the Pjpaintings stall #30 at Salamanca Market.
P.S. I won’t be at Salamanca Market next Saturday because I’ll be delivering my Square Dancing original painting and prints to Art as Mania Gallery in Deloraine, Tasmania. Deloraine is hosting the 60th National Square Dancing Convention, April 5-7, 2019.
Advertisement